TV and movie props hold a certain fascination for me. And, the Star Trek TNG era introduced us to some amazing tech and gadgets but, none so special as the Mark VI (and upwards) Tricorders.

Even since I saw one of the TNG crew (usually Data) open up that box of wonderful blinking lights and soft warbling sound I was transfixed. And, over the years, I have attempted to get my hands on the most accurate replicas I could. I even owned the infamous Playmates Tricorder released back in the 90s. Which was pretty good for its time but always disappointed due to its lack of lights.

Needless to say that when I came across a Tricorder for around £10 (at the time of writing), which featured an impressive array of lights and sound I knew I had to have it and literally bought one the moment I saw it.

In this review, I’ll walk through the Light and Sound Tricorder so you can find out what it does and how it compares to some other replicas on the market. Let’s dive right in. 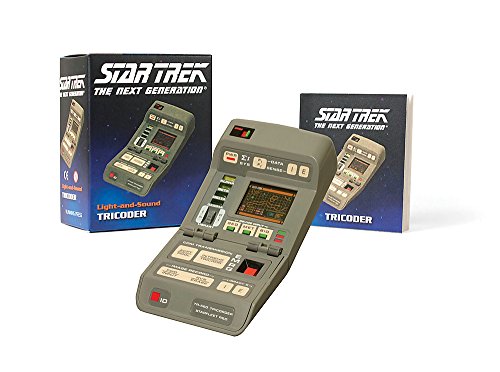 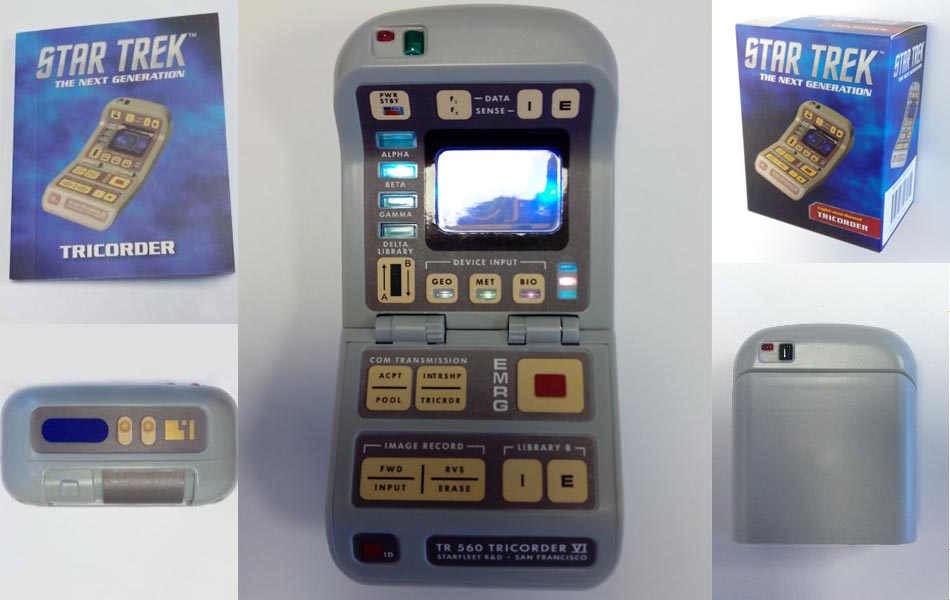 Inside the box, you’ll find the Tricorder itself, a set of stickers and a nice little book detailing the history of the Tricorder. It was also great to see that the batteries were also supplied and installed.

The book is 47 pages long and written by Chip Carter who has created books for many of the miniature Star Trek Collectibles in this line. It details the evolution of the Tricorder, what the different dashboard functions do and has some great pictures (including a very cheeky looking Wesley Crusher on the last page).

Even the box it arrives in is worth keeping. A beautiful design clearly showing the Tricorder and a metallic embossed label reading ‘Deluxe Mega Kit’ make for a nice place to store your Tricorder if you’d like to keep it safely tucked away.

Now, this has led to some frustration with some fans who have bought this KIT (emphasis on the word kit) and that is you need to apply the stickers yourself. But I have to say I didn’t find it a big deal. In fact, I often prefer to apply stickers and decals myself because you can take some care and often get a neater result than if they were hastily applied in the factory.

The stickers are pre-cut you just need to peel them off the backing paper. Although I did notice that one or two of the stickers weren’t fully cut and needed to be trimmed using a craft knife. But this was just the perfectionist in me wanting as neat a Tricorder as possible.

The stickers are made of a heavy paper that is coated with a matt plastic to give them a nice dull sheen and is fairly accurate to the finish of the screen-used props.

Once applied the stickers literally transform this kit from a bland grey box into a Tricorder. 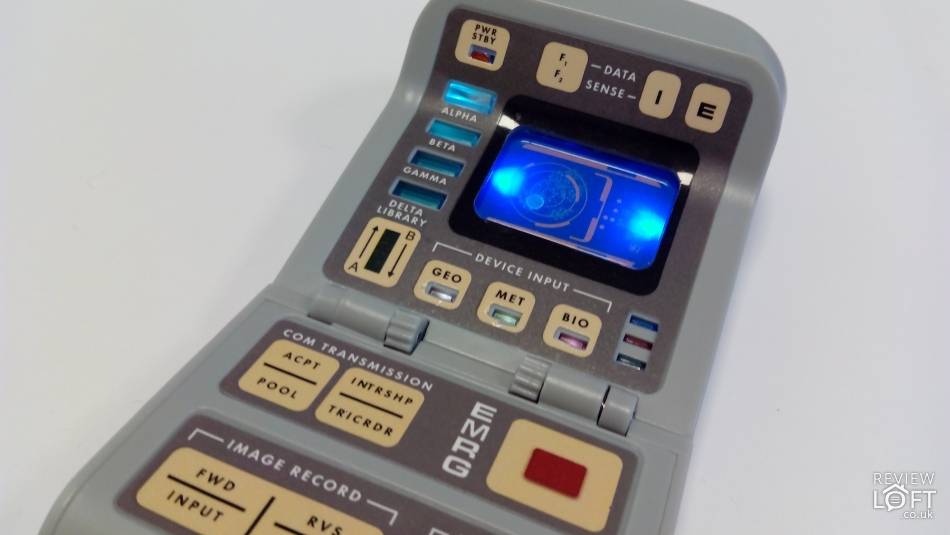 Accuracy and How This Tricorder Compares to Other Replicas 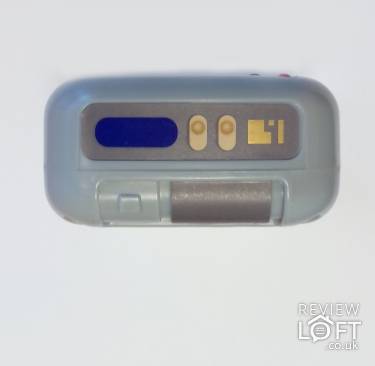 The Mark VI’s handscanner is sculpted into the top. Whilst this cannot be removed it was a nice nod to accuracy.

So, you really need to bear this in mind when buying this Tricorder. That said, this tiny little kit really does hold its own. The nods to accuracy really stand out such as the highly curved top of the Mark VI (very screen accurate) and even the pale cream background to the EMRG button which was changed to dark grey (along with a host of other changes) on the Mark VII Tricorder.

Running Press even took the time to sculpt the handheld scanner found in the Mark VI. This was dropped on later models and reserved for medical Tricorders, so its really good to see it here, because it shows some real research and respect for the fans who want something as screen accurate as possible (even if this scanner is not detachable). 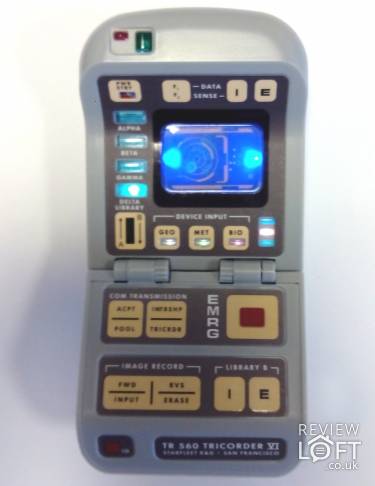 Opening up the Tricorder brings it to life. A fairly authentic ratcheting sound is made as you open up the device which again is a nice nod to sound made on-screen.

The Geo, Met and Bio indicators are static, but illuminated, as they should be. And, to the right bank of 3 indicators flash, powered by one LED. This adds to the effect but there should really be 3 individual LEDs here.

The main display power light and power-on indicator lights located on the front face of the tricorder all illuminate. These aren’t the brightest because they appear to be powered by the light from one LED which is funneled through a clear plastic bezel. But it is still effective all the same.

There are no lights on top scanning array which is a little disappointing and I assume this was done to reduce the cost. However, I would have been happy to pay more for this Tricorder to feature those. But since the Mark VI only sported 6(ish) lights on top its not the end of the world.

To say I adore this miniature Tricorder is an understatement. It ticks a lot of the boxes for me: it’s very accurate, features a good array of lights, features sound (even including the distinct ratchet on opening and closing) and is very affordable.

Sure, it’s not full-sized and it doesn’t feature the lights the Mark VI top scanner array sported but these faults can be overlooked because of the incredibly low price. Let’s hope there’s more to come. Hopefully, we’ll see a Mark VII (Maybe even a Mark IX) in future releases and I will definitely keep an eye on this range.